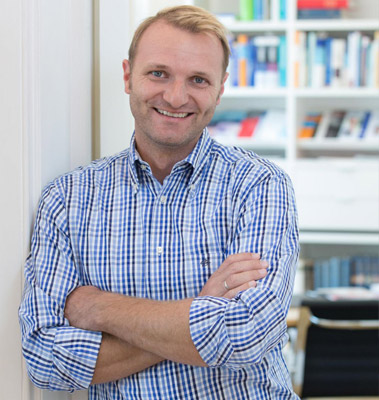 Dr. Peter studied medicine at the Johannes Gutenberg University in Mainz from 2001 to 2007. During his studies he did clinical work in Vienna and at the Central Military Hospital in Koblenz.

He began his specialized surgical training in 2007 in the general surgical unit at St. Markus Hospital in Frankfurt with Prof. Dr. Karl-Hermann Fuchs, specialist in minimal-invasive surgery.

In 2010 he began working at Frankfurt University Hospital, which FOCUS magazine repeatedly has ranked one of the top ten hospitals in Germany.

He completed his training as a specialist for vascular surgery at the Clinic for Vascular and Endovascular Surgery with Prof. Dr. Thomas Schmitz-Rixen, one of the most renowned German vascular surgeons. In addition, Dr. Peter received the Phlebology Certificate of the German Society of Phlebology.

Beginning in 2013, Dr. Peter worked as a senior physician, the same year the German Society of Surgery gave him an award for his research on Hughes-Stovin syndrome. He has published articles in professional journals and given numerous lectures at medical and academic conferences; he has also taught and trained medical students. He published articles in scientific journals, gave numerous lectures at congresses and advanced training courses and was also involved in the teaching and training of students.

In 2015, Dr. Peter took over a vein practice in Wilhelmstraße, where he introduced the focus on endovenous procedures laser, radio wave and VenaSeal and established the phlebicum.

Since 2018, he has been a member of the board of the Association of Vascular Surgeons and Vascular Physicians in Germany (Arbeitsgemeinschaft der niedergelassenen Gefäßchirurgen und Gefäßmediziner Deutschlands e.V.) and since 2019, a member of the Phlebology Commission of the German Society of Vascular Surgery and Vascular Medicine (Deutsche Gesellschaft für Gefäßchirurgie und Gefäßmedizin).

Dr. Peter is married and has two children.